Ruth’s organ career at First Christian Church began when the regular organist had an accident and broke her leg. Easter Sunday in 1966 was the beginning of a long career and many years of joy in service to the church. Ruth is very grateful for the many friends she has made in the church throughout her fifty-two years as organist.

Dr. Krusemark received her undergraduate degree in Piano Performance at Benedictine College in Atchison, Kansas. She later earned a Master of Music degree in Piano and a Doctor of Musical Arts degree in Organ from the University of Kansas. Dr. Krusemark is the Kremmeter Professor and Chair of the Music Department at Benedictine College where she teaches piano, organ, and music theory. Ruth began teaching at the college in 1976 and will retire from her post at the end of the 2018-2019 academic year. She is proud to have been named the “Outstanding Educator” for Benedictine College in 1994 and was awarded the first endowed professorship in the history of the college in 2013. Dr. Krusemark is also proud to have made five trips to Italy with her college choir where she met and sang for Popes John Paul II (now a saint!) and Pope Benedict.

Ruth’s children and grandchildren are her most treasured gifts. Jeff and Angie live in Kansas City with their families. Granddaughters Miri, Charlie, and Kat provide great love and excitement to Ruth’s life, and she looks forward to spending more time with them after her retirement from the college. 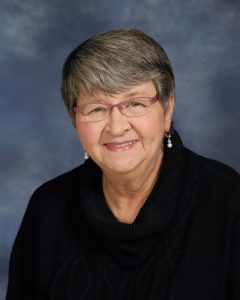 Fun Fact Ruth likes to fish! She says it’s her “therapy” and one summer she counted 1000 fish caught at Warnock Lake.